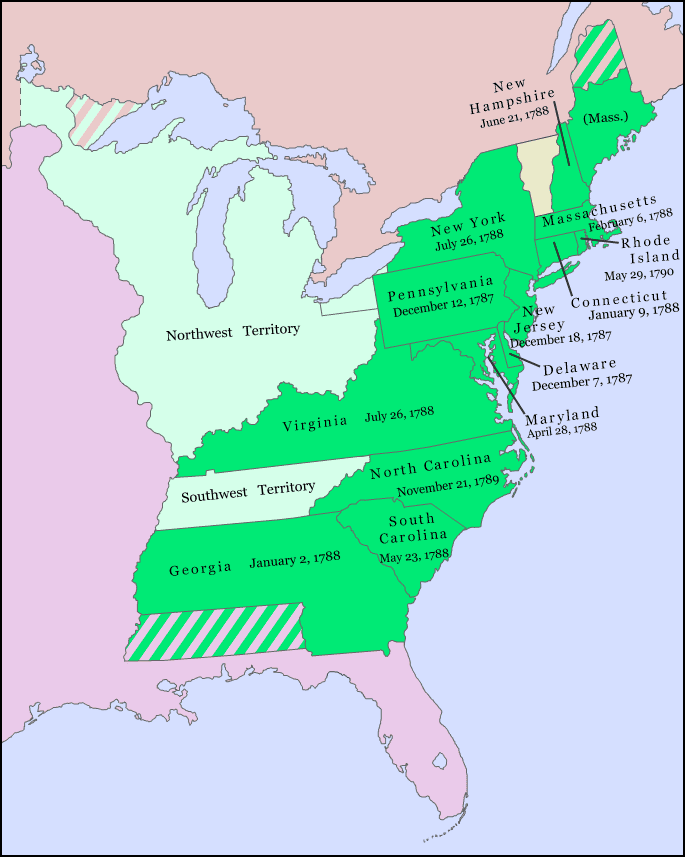 The Constitution of the United States

The Constitution acted like a colossal merger, uniting a group of states with different interests, laws, and cultures. Under America’s first national government, the Articles of Confederation, the states acted together only for specific purposes. The Constitution united its citizens as members of a whole, vesting the power of the union in the people. Without it, the American Experiment might have ended as quickly as it had begun.

The Constitution: What Does it Say?

The Constitution of the United States contains a preamble and seven articles that describe the way the government is structured and how it operates. The first three articles establish the three branches of government and their powers: Legislative (Congress), Executive (office of the President,) and Judicial (Federal court system). A system of checks and balances prevents any one of these separate powers from becoming dominant. Articles four through seven describe the relationship of the states to the Federal Government, establish the Constitution as the supreme law of the land, and define the amendment and ratification processes. 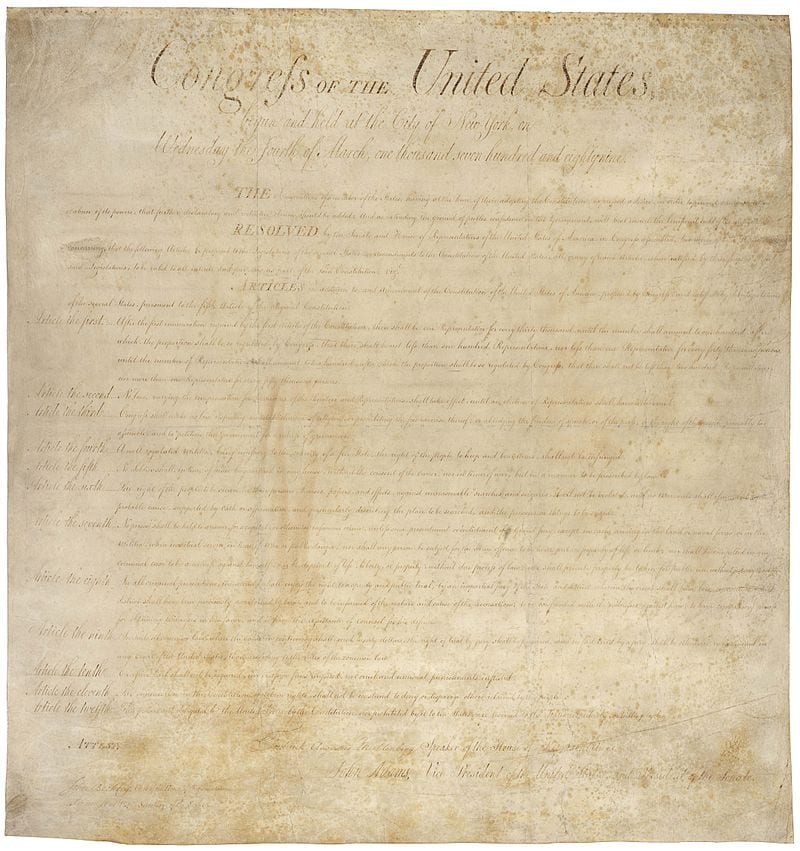 Article I assigns the responsibility for making laws to the Legislative Branch (Congress). Congress is divided into two parts, or “Houses,” the House of Representatives and the Senate. The bicameral Congress was a compromise between the large states, which wanted representation based on population, and the small ones, which wanted the states to have equal representation.

Article II details the Executive Branch and the offices of the President and Vice President. It lays down rules for electing the President (through the Electoral College), eligibility (must be a natural-born citizen at least 35 years old), and term length. The 12th and 25th Amendments modified some of these rules.

Article III establishes the Judicial Branch with the U.S. Supreme Court as the federal court system’s highest court. It specifies that Federal judges be appointed for life unless they commit a serious crime. This article is shorter than Articles I and II. The Federal Convention left much of the work of planning the court system to the First Congress. The 1789 Judiciary Act created the three-tiered court system in place today.

Article IV outlines states’ powers in relationship to each other. States have the authority to create and enforce their own laws but must respect and help enforce the laws of other states. Congress may pass Federal laws regarding how states honor other states’ laws and records.

Article VI states that Federal law is supreme, or higher than, state and local laws. This means that if a state law conflicts with a Federal law, Federal law takes precedence. 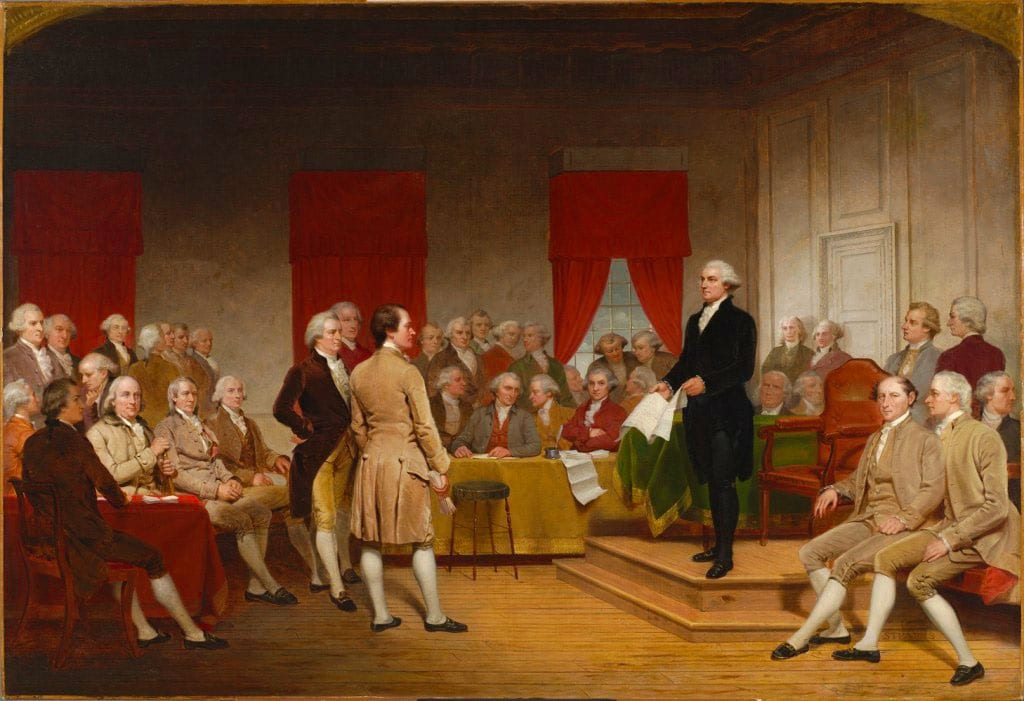 The Constitution: How Did it Happen?

Concern about the Articles of Confederation

Just a few years after the Revolutionary War, James Madison, Alexander Hamilton, and George Washington feared their young country was on the brink of collapse. America’s first constitution, the Articles of Confederation, gave the Confederation Congress the power to make rules and request funds from the states, but it had no enforcement powers, couldn’t regulate commerce, or print money. The states’ disputes over territory, war pensions, taxation, and trade threatened to tear the young country apart. Alexander Hamilton helped convince Congress to organize a Grand Convention of state delegates to work on revising the Articles of Confederation.

Washington as Statesman at the Constitutional Convention, 1856

Oil on canvas by Junius Brutus Steams. Courtesy of the Virginia Museum of Fine Arts

The Constitutional Convention assembled in Philadelphia in May of 1787. The delegates shuttered the windows of the State House and swore secrecy so they could speak freely. Although they had gathered to revise the Articles of Confederation, by mid-June they had decided to completely redesign the government. There was little agreement about what form it would take.

One of the fiercest arguments was over congressional representation—should it be based on population or divided equally among the states? The framers compromised by giving each state one representative for every 30,000 people in the House of Representatives and two representatives in the Senate. They agreed to count enslaved Africans as three-fifths of a person. Slavery itself was a thorny question that threatened to derail the Union. It was temporarily resolved when the delegates agreed that the slave trade could continue until 1808. 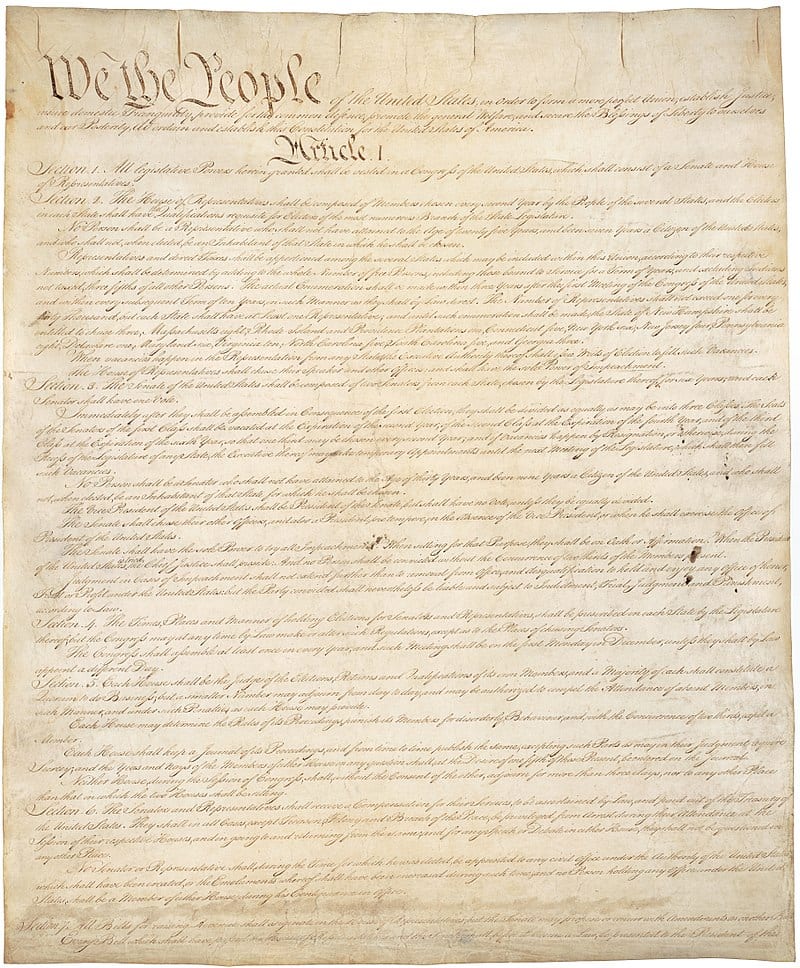 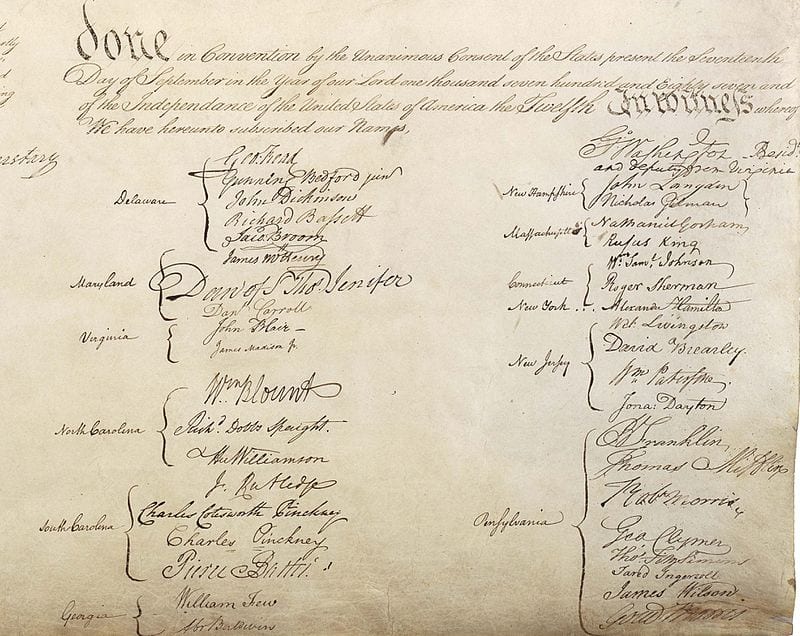 After three hot summer months of equally heated debate, the delegates appointed a Committee of Detail to put its decisions in writing. Near the end of the convention, a Committee of Style and Arrangement kneaded it into its final form, condensing 23 articles into seven in less than four days.

On September 17, 1787, 38 delegates signed the Constitution. George Reed signed for John Dickinson of Delware, who was absent, bringing the total number of signatures to 39. It was an extraordinary achievement. Tasked with revising the existing government, the delegates came up with a completely new one. Wary about centralized power and loyal to their states, they created a powerful central government. Representing wildly different interests and views, they crafted compromises. It stands today as one of the longest-lived and most emulated constitutions in the world. 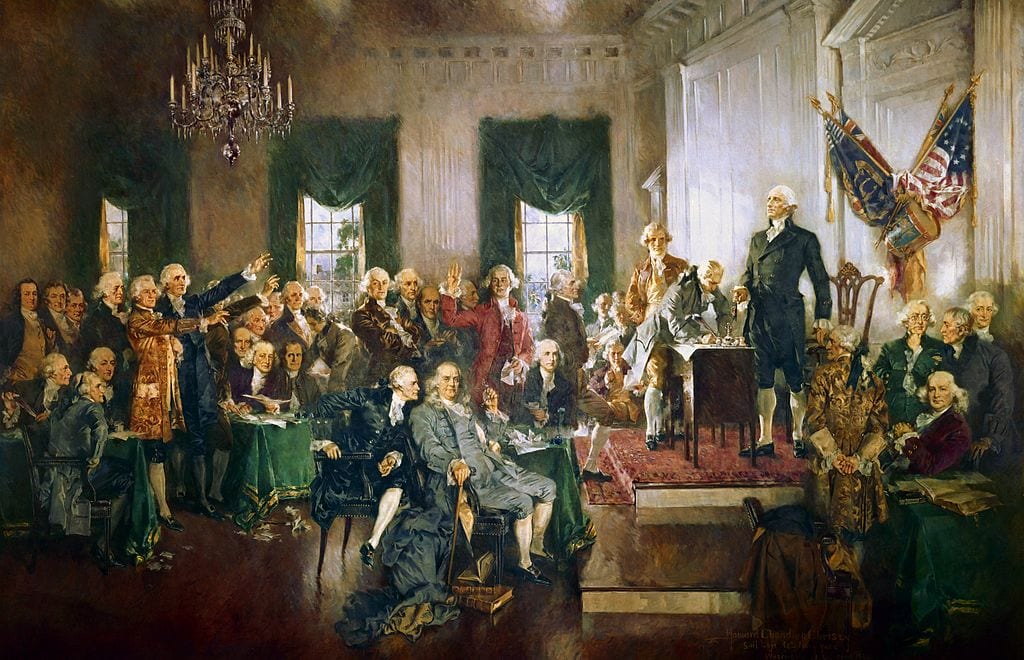 The founders set the terms for ratifying the Constitution. They bypassed the state legislatures, reasoning that their members would be reluctant to give up power to a national government. Instead, they called for special ratifying conventions in each state. Ratification by 9 of the 13 states enacted the new government. But at the time, only 6 of 13 states reported a pro-Constitution majority.

The Federalists, who believed that a strong central government was necessary to face the nation’s challenges, needed to convert at least three states. The Anti-Federalists fought hard against the Constitution because it created a powerful central government that reminded them of the one they had just overthrown, and it lacked a bill of rights.

The ratification campaign was a nail-biter. The tide turned in Massachusetts, where the “vote now, amend later” compromise helped secure victory in that state and eventually in the final holdouts.

Meet the Framers of the Constitution

The original states, except Rhode Island, collectively appointed 70 individuals to the Constitutional Convention. A number of these individuals did not accept or could not attend, including Richard Henry Lee, Patrick Henry, Thomas Jefferson, John Adams, Samuel Adams, and John Hancock. In all, 55 delegates attended the Constitutional Convention sessions, but only 39 actually signed the Constitution. The delegates ranged in age from Jonathan Dayton, aged 26, to Benjamin Franklin, aged 81, who was so infirm that he had to be carried to sessions in a sedan chair.

Biographical Index of the Framers of the Constitution

Rhode Island did not send any delegates to the Constitutional Convention.